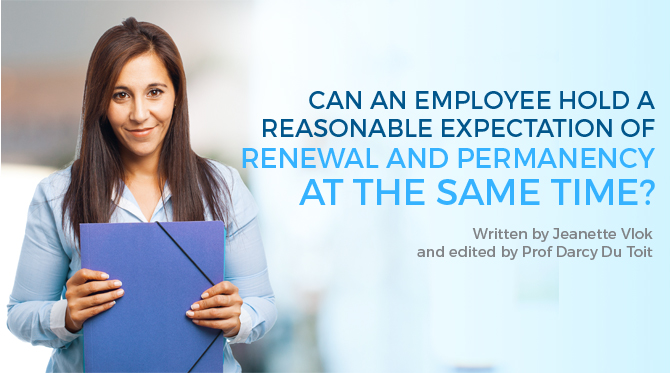 An employee can refer an unfair dismissal dispute to the CCMA or bargaining council in terms of section 186(1)(b) of the Labour Relations Act, 66 of 1995 (LRA) if the employee was employed on a fixed term contract and reasonably expected that the employer would –

Such a review application was heard in the Cape Town Labour Court on 31 May 2017 by Judge Anton Steenkamp in City of Cape Town v IMATU obo Searle & Others under case number C494/2016.

The Court in the Searle case agreed with the City’s interpretation of the section and inter alia concluded that the award should be reviewed and set aside for the following reasons:

Employers should therefore insist that employees clarify the exact basis of their disputes before proceeding with their cases. If commissioners are reluctant to accept the above interpretation of section 186(1)(b), the above judgment can be referred to.