BCHC: Must employers hold a hearing before placing an employee on precautionary suspension? 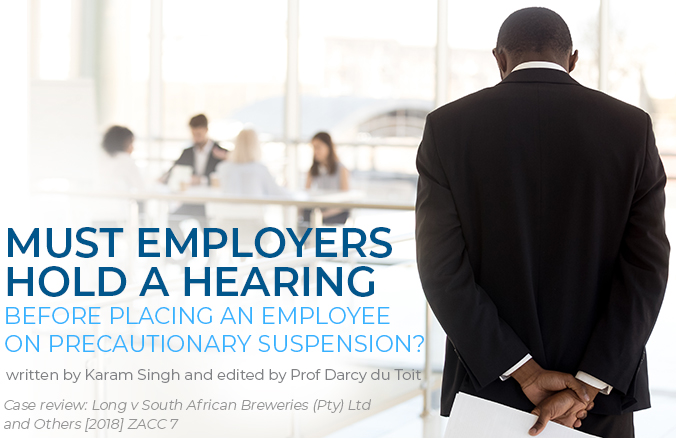 On 19 February 2019 the Constitutional Court handed down judgement in the case of Long v South African Breweries (Pty) Ltd and Others in which the Court unanimously rejected the applicant’s submission that employees are entitled to a pre-suspension hearing.

From 2008, Long was employed by SAB as a district manager. His responsibilities included ensuring that the company complied with all legal requirements in respect of its operation in the Border District, including requirements relating to licensing and maintaining a fleet of vehicles. In late 2012, Long was informed about irregularities regarding the vehicle fleet including fraudulent activities. An investigation revealed discrepancies in fleet records, also that vehicles and trailers were unlicensed and not roadworthy. In May 2013, a trailer was involved in a fatal accident. Shortly thereafter Long was advised that he was being investigated for dereliction of duties and gross negligence. He was placed on precautionary suspension to ensure that the investigation could proceed unhindered.

In August 2013, three months after being placed on suspension, Long was given notice to attend a disciplinary enquiry for allegations of gross dereliction of duties, gross negligence, dishonesty, derivative misconduct and bringing the company’s name into disrepute.  The hearing commenced in late August.  In October 2013, Long was found guilty of three of the allegations and was dismissed.

Long took the matter to the CCMA in two separate disputes.  The first concerned his suspension pending disciplinary proceedings. The arbitrator held that his suspension amounted to an unfair labour practice because he had not been given a prior hearing and that the suspension was unreasonably long.  As a result, Long was awarded two months’ compensation. In the second dispute relating to Long’s dismissal, the arbitrator found that the illegalities regarding the maintenance and registration of vehicles did not fall within his responsibility and ordered SAB to reinstate him.

On review, the Labour Court set aside both awards.  Leave to appeal to the Labour Appeal Court was refused, but the Constitutional Court granted Long leave to appeal on the question of whether a pre-suspension hearing is required in the case of a precautionary suspension.

Regarding suspension, the Labour Court held that, where a suspension is precautionary and with full salary, there is no requirement that the employee be allowed to make representations.  In the Constitutional Court, Long submitted that this finding went against existing case law and that the arbitrator’s finding that the length of the suspension was punitive meant that it was unfair.

Thus, the LRA’s requirements relating to fair disciplinary action do not apply when suspensions are instituted for precautionary as opposed to punitive reasons.  As the Court summarised, “[w]here the suspension is precautionary and not punitive, there is no requirement to afford the employee an opportunity to make representations.”

This judgement is good news for employers as it will speed up the overall disciplinary process and does away with the need to deal with unnecessary suspension disputes.